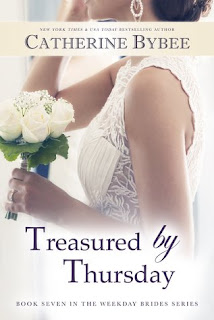 The seventh and final tale in the dazzling, heartwarming, and pulse-racing Weekday Brides series.

Gabriella Masini: She’s a woman haunted by her past, with the scars to prove it. She believes that fairy tales are for other people. An elite matchmaker at Alliance, she’s great at crunching numbers, but something doesn’t add up with her latest prospective client: a billionaire bad boy with his own secrets. When Gabi refuses to be his temporary wife, Hunter forces her hand with an offer she can’t refuse. But marriage to a man like that could never last…or could it?

Hunter Blackwell: Only his bank account is bigger than his ruthless ability to obtain anything he wants. These days, he has a secret reason to settle down, at least for a while—and he thinks the sensual and sassy Gabi will fit the bill perfectly. But when their marriage of convenience becomes downright dangerous, Hunter must decide how far to take his vow to honor and protect Gabi forever.

“I think we should talk about what’s going on here.”

She shook her head, taking the coward’s way out. If she noticed the lock of hair falling into his eyes a second time, she might have to push it back in place.

“Gabriella?” The smooth texture of his voice was like chocolate on her tongue.

His sticky hand tucked under her chin and forced her to meet his gaze.

He stepped closer, his frame molding to hers and pressing her back against the counter.

His thumb traced her bottom lip. “This is a bad idea,” he mumbled her thoughts.

She nodded. “Very poor choice.” Her hands gripped the side of the counter to keep from touching him.

Hunter sucked in a deep breath. “You smell like flowers.”

He started to dip his head and she kept talking. “Something musky, so you won’t notice me.”

He was close enough to catch the scent of mint on his breath. “I don’t even like you.” One of her legs lifted and rubbed against one of his.

“I don’t trust you.” His hand moved from her lip the side of her neck.

“You tricked me into cooking with your mother.”

She smiled. “The two hardly compare.”

Instead of dropping his lips to hers, he detoured to the side of her neck and kept talking, his breath brushing her skin. “Have you met your mother?”

His lips found her neck.

She moaned and closed her eyes. Such a deliciously bad idea.

I am SO sad to see that this series is ending.  I have loved every single one of the books in this series, and this one is no exception.

We get romance, suspense, blackmail and as always the importance of friends and family.

Hunter turned from a bit of a cold hearted man, to a man who found the benefit of having a loving woman at his side, a companion and someone to look after without thinking of just himself and what he wanted.

Gabi was a woman with emotional scars from her previous husband, wounded in the worst way and has since not had a relationship since, she also flinches whenever a man touches her.  She knows what she has signed herself up with and finds that not everything is as it seems again with a man she has matched up with.

It doesn't take long for hate to end up as something else and for friends and family to say they will help if they can.

Catherine Bybee will continue to be an author that I keep my eye out for as her style of writing draws me in and keeps me wanting more.  I look forward to what she will come up with next.

BIO:
New York Times & USA Today bestselling author Catherine Bybee was raised in Washington State, but after graduating high school, she moved to Southern California in hopes of becoming a movie star. After growing bored with waiting tables, she returned to school and became a registered nurse, spending most of her career in urban emergency rooms. She now writes full-time and has penned the Weekday Brides Series and the Not Quite Series. Bybee lives with her two teenage sons in Southern California.

a Rafflecopter giveaway
Posted by Mrs B's Books at 1:00 am