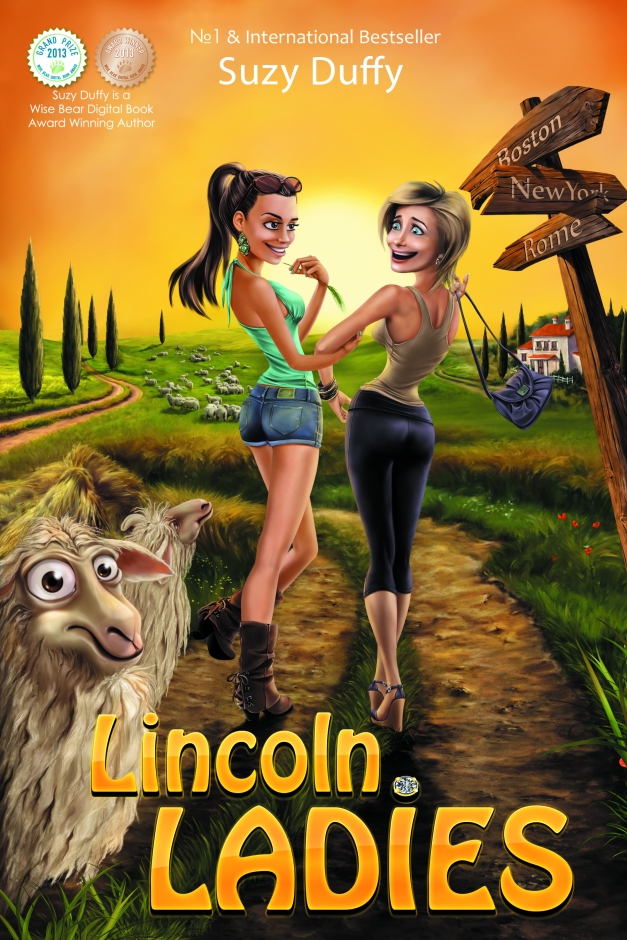 ~~SUMMARY~~
Kate Kavanagh is happy raising her daughter and focusing on work, but when the girl moves to New York for a fantastic job and ends up moving in with her philandering father, things get complicated. Her best friend, Madeline Stein, has been a career girl all her life. As a single mom, her job defines her, so when she loses it, Maddy needs to find something or someone else to make her forties fun. Portia Kavanagh hits New York with a bang, but she’s so hungry for adventure she bites off more of the Big Apple than planned. Portia retreats to what she thinks is the sanctuary of her father’s home and soon discovers she’s not the only one in the family with an overactive appetite. Kate and Maddy find themselves leaving their lovely hometown of Lincoln, outside Boston, for the fertile and romantic hills of Tuscany. However, blue skies, rich wine, and charming Italians bring the women a whole new world that they have to maneuver with the grace and style of a Lincoln Lady. Portia’s high-octane life in Manhattan comes at a price, too. Out of the millions of men she could have, she chooses the only one she’s meant to avoid. Her quandary: Has she made a mistake of epic proportions or found the one in a million? This is a story of three fantastic women on a journey of self-discovery. With more ups and downs than a Florentine fairground, the ladies survive love, loss, and fresh pasta by laughing at life and using a doggie bag. There are lots of thrills and spills along the way, but in the end it’s all about friendship, attitude, and walking off that fabulous food. Come on an adventure and enjoy the ride with the lovely Lincoln Ladies.

Suzy Duffy is an international and #1 best-selling author. She writes laugh-out-loud, life-affirming stories about women from five to ninety-five. (Sometimes she writes about men, too, but only for comedic purposes, and pets—if they’re funny.) Her books have won numerous awards and critical acclaim. They’ve been published in Norwegian and German, and she gives 10% of her royalties to www.FOBH.org Her New England trilogy includes: Wellesley Wives – September 2012 Newton Neighbors – September 2013 Lincoln Ladies – September 2014 Praise for Duffy: “Five Star rating . . . An all-American heart-warming romantic comedy.” “Suzy Duffy . . . I had wondered who would be filling Maeve Binchy’s shoes . . . EXCELLENT . . . Highly Recommended.” “Duffy isn’t just a good writer, she’s a darn good storyteller, too—a rare combination.” Suzy is Irish and currently lives in Boston with her husband, five children, and one dog. She was recently a guest speaker at the Sydney Writers Festival in Australia. She loves connecting with readers, book clubs, and writer’s events.


Tell me about your process…
I’ve been making up stories since I was three. I started to write them down when I was about seven, but I didn’t get to write a full novel until I was home with my own babies.  Everybody approaches it differently.  For me, I start with a strong scene, something worthy of my reader’s attention and gripping enough to engage them.  Then the story starts to take legs.  I’m character and plot driven.  How the characters develop determines how they handle a situation.  I usually know where they’ll end up. It’s a bit like driving home in the fog. I know where I’m going but can’t see the whole route clearly. It keeps it interesting.

Do you choose a title first, or write the book then choose the title?
I have a list of titles I like.  A book often starts with a working-title and finishes with another.  It has to be memorable in today’s busy book world.  I was half way through Wellesley Wives with the title “It’s only lunch,” when I decided Wellesley Wives was more fitting. I don’t think the book would have taken off with the name “It’s only lunch.”

Do you have an idea of the characters looks and features before you start writing?
Before I begin, I have their name, date & place of birth.  These might change, but it’s a starting point. That background information mightn’t appear in the book, but I need it to keep the character clear in my head. I’d also have a basic idea of what they look like; tall, short, ethnicity etc. but they’ll develop as I go along. I have a document for every book called; Cast. At the end of each writing session I’ll add new features, mannerisms, habitual expressions to each cast member.  This is a really important tool for me.  For example if you have somebody who has a habit of saying “Ho, hum,” you better make sure nobody else says it.  It’s easily done as a writer, but very annoying for a reader.  Only one character should fork his hands through his hair. To be honest, nobody should – it’s so overused – but you know what I’m saying. Different characters shouldn’t have the same mannerism – unless it’s part of a subplot – surprise illegitimate son maybe.

How do you come up with characters names and place names in your books?
Sometimes it’s pure fun.  I can choose any name I like.  I’ve let fans choose names and done character-name giveaways too.  Follow me on Facebook for more on that.
https://www.facebook.com/Suzyduffybooks1?ref=hl  I often use real places in my books so those names will have to be authentic but if I make them up, there’s usually a reason behind it that will come out over the course of the story. (Plot Spoiler – In my book, The Will To Win, Samantha Garcia called her new Beer product Gracias. It only came out at the end of the story that this was because Gracias is an anagram of her name S. Garcia!)

Have you ever based characters on people you know or based events on things that have happened to you?
Yes! The opening scene in Wellesley Wives is of a beautiful blonde in a red Ferrari. That was a real scene in down-town Wellesley, where I live. I was drudging along in my SUV with five bickering kids in the back.  The baby was whining because the dog had eaten all the sandwiches. I felt like I was 100 years old and needed to sleep for a year and the traffic was backing up.  That’s when an exquisite looking young blond woman revved up next to my car. She was in her hot red Ferrari, hood down and Lady Gaga was blaring out of her super-powerful sound system.  I wanted to cry.  Naturally her traffic light filter turned green first and she whisked away, oblivious to my jealous misery.  On the way home I began to write the opening scene of Wellesley Wives and promised myself that all would not be as sweet as it seemed.

In Newton Neighbors the opening chapters with the Fire engines and cop cars are based on real life experience and in my newest story; Lincoln ladies – the younger girl heading out into the big wide world, leaving her mother behind is half true.  My daughter returned to Dublin, Ireland this September to start college while I’m in Boston. There’s a grain of truth in most of my stories.

Are you a write as you go person, a planner (the whole outline first) or something else altogether different?
For me, it all starts with a strong first chapter. I usually know where I’m going and I can identify some big scenes along the way but I have no idea how to get to the finish line.  Like life, I take it step by step with a few loose plans, a dream or two and a whole lot of hope.

Have you ever suffered writer's block and how did you get past it?
I’ve always believed that I could work through writers block.  I’ve had glitches in the past and ploughed through them. Even when I know things are going bad, I just keep going because you get back into the sunlight eventually.  Then it’s real important to delete all the junk. Anything you wrote during your writers block is not worth saving – just get rid of it and keep the good stuff. Your readers will thank you.
That said, I hit a funk last January.  Love that work – funk!  It was a writing friend who told me about it.  Anyway this was a major funking funk. I just couldn’t go near my computer.  I’d written three books in three years and I think I was burnt out.  I stepped back and took a big breather. Nine months later, I’m back at the computer and the ideas are flowing again.  I guess we’re not machines and everybody needs to rest up. If you’re really suffering from writers block; Read. It’s perfect escapism and it’s going to help you writing when you’re back on track. Choose books in the style you like to write and enjoy reading them without analyzing too much.  You’ll be surprised how much goes in subliminally. You don’t need a pen and paper to take notes because you’re absorbing style and technique as you go.  Eventually writers block will pass and you can get back down to business.  I hope you like reading my books as much as I loved writing them.  Get connected through these links.
Lots of love,
Suzy
XXX