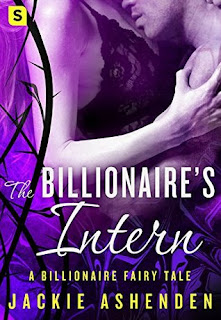 An intensely sexy Billionaire Fairy Tales standalone novel by Jackie Ashenden that is billionaire romance meets Sleeping Beauty with a happily ever after.

Lorenzo De Santis: Ruthless. Driven. Ambitious.
Lorenzo De Santis is the boss. He's an uncompromising hardass, he doesn’t suffer fools, and he doesn’t have time to deal with witless young interns. But when an old friend asks for a favor, Lorenzo can’t refuse. Even if it means taking on the man’s daughter as a project.
Kira Constantin: Rich. Party girl...Spy.
Kira Constantin feels like she has been half-alive since that one night of partying ended in tragedy. So when her father demands that she go undercover at De Santis Corp as a spy, there’s no way she can refuse. She must redeem herself, even if that means dealing with a boss like of Lorenzo De Santis.
Except neither of them counts on the forbidden heat that flares between them. As Kira and Lorenzo draw closer, spying on him becomes harder and harder. And then Kira discovers that the real villain might be closer to her than she thinks…
Don't miss these standalone Billionaire Fairy Tales:
The Billionaire's Virgin (Cinderella)
The Billionaire Beast (Beauty and the Beast)

My Review  4 STARS
**My thanks to NetGalley and St Martin's Press, for providing me with a free copy for an honest review**

This is the third book in the series and can be read as a stand alone book as the brothers do not really communicate or cross wires.

Lorenzo is older than Kira, but we never really can a drop on their ages, but we know that it must be at least ten years.  Kira has looked up to Lorenzo since he helped her out at a do when she was around 10 and in her teens had a crush.

Now, the woman she has become has a thing for him, while he after his experiences just has preconceived ideas about her that turn out to be completely wrong.

Both have fears to get over, but it is not long before Kira warms up Lorenzo's heart towards her without him having realised how much.

Both can relate to each other and find strength and understanding where others have not given it where it was needed before.

Another great book in the series and i cannot wait for the next book.
Posted by Mrs B's Books at 9:32 pm