REVIEW - Promise Me, Cowboy (Carrigans of the Circle C #1) by C.J. Carmichael 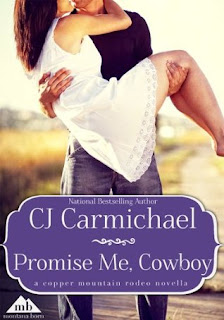 Sage Carrigan never meant to be the other woman. Unfortunately, bronco rider Dawson O’Dell neglected to mention he was married the night he invited her to his bed after they’d both placed first in their rodeo events. When his wife walked in on them – Sage was deeply hurt and humiliated. After an accident in the ring the next day, Sage decides she’s quitting the rodeo–and cowboys—to become a chocolatier in her hometown ranching community, Marietta, Montana. She’s doing just fine, but then Dawson shows up —five years later, with a little girl in tow. He’s here for the Copper Mountain Rodeo hoping to win big. But he’s also got plans of settling down with his daughter and buying a house—the very same one that Sage has been dreaming about. He says he’s here for her and he’s making lots of promises. But can he keep them?

My Review 3 STARS
This is a nice romance that only has a little kissing and glosses over the one time Sage and Dawson had together in the past.

Sage gave up barrel racing after having an accident and went home to Marietta five years ago and ended up opening a chocolate shop.  Dawson has never stopped thinking of Sage and the time they spent together and has worked had to get a more stable life and to calm down, especially as he has his daughter with him most of the time.

Both still have strong feelings for each other, but it is only with his divorce papers finally through that Sage decides that it is time to forget the past and forge ahead to a future together with the man she never forgot.

There are a few plot lines in the book that seem to go nowhere, however i get the feeling that they will get picked up in future books with the rest of the sisters and Eliza Bramble.  Hopefully we will get to see what Sage's father is hiding in his closet.
Posted by Mrs B's Books at 2:26 pm