Mr. Virile and the Girl Next Door by Gwen Hayes 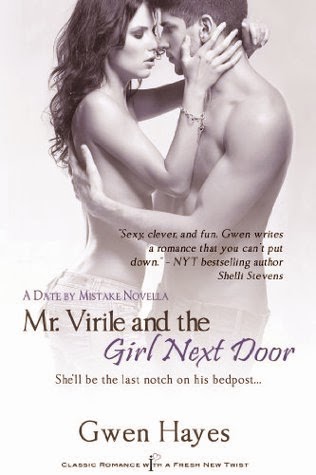 Online virile.com dating columnist Dane Martin has no plans to give up his reign as bachelor extraordinaire. He has a reputation to uphold, especially with the upcoming release of his book Coming on Strong.
Holly Winters, everyone’s favorite girl next door, thanks to her blog of the same name, gives advice, but she doesn’t always take it. When she meets Dane Martin, every fiber of her being warns her to turn tail and run. Instead, she risks her future as an authority on relationships, jeopardizing her upcoming self-help book for women struggling to find commitment among the Virile sycophants.
Has the Girl Next Door tamed the most Virile man alive, or is she just another notch on the bedpost?
My Opinion  3 STARS**ARC Provided by Netgalley and Entangled Publishing, LLC for an honest review**
We have two relationship bloggers, the Girl Next Door and Mr. Virile, both are set up on a date by their agents on a bet. However as the surprise meeting ends up in the gossip column of a magazine, it is decided that perhaps they should be publicly seen to be dating to help each others books which are coming out.
I wanted to like this book more than I did. In its way, it was OK, however, for some reason it fell a little flat, even though the story line was good. Yes there was sexual tension, yes there was good banter, but something just didn't quite click for me.
On the whole I would have to say that this is a slightly flat average read.
Posted by Mrs B's Books at 10:59 pm