REVIEW - Sunny with a Chance of True Love: The Ballad of Ugly Ross by Jessie Evans 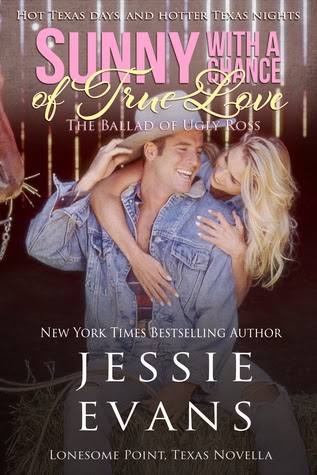 A Lonesome Point NovellaOne voice can save a life; one heart can bring you home…Ross Dyer is ready to give up on love. The sweet, sleepy-eyed cowboy has always danced to the tune of a different drummer, but after being dumped by his latest girlfriend, he’s beginning to think he’ll spend his life dancing—and sleeping—alone. Add in the impending failure of his newly opened restaurant, due to a smear campaign being waged by his childhood nemesis, and Ross doesn’t have much reason to care if the armadillo sees his shadow on Armadillo Day. Whether Lonesome Point has six more weeks of winter or not, his life forecast is looking more foul than fair.And then she comes home and nothing is the same again.Fourteen years ago, Elodie Prince was a scared little girl who was neglected at home and bullied at school. In her dark world, the only light was a sweet boy everyone called Ugly Ross, who, to her, was always beautiful. When she returns to Lonesome Point to find her childhood friend has grown into a man as handsome as he is kind, she can’t help falling in love.Elodie and Ross dive head first into Happily Ever After, but find their future threatened by a vicious blast from the past. Because some bullies never grow up, they only grow meaner, and more determined to snuff out the lights of the things that shine.

This novella is part of the Lonesome Point, Texas series and is a must read.

Ugly Ross was named so as a child as there was another Ross in his classes that as well as being the bully was also better looking than him.  But if you get the chance to get to know him, you very quickly realise that the name Ugly Ross does not suit him at all.

Yes he was a little awkward as a child, but to be honest most boys go through this, but what sets his apart is his amazing heart.

Ross knew from a young age that Elodie held a special place in his heart, and even when she left aged 12, he never forgot the girl he would spend afternoons with.

Back in Lonesome point, both find very quickly that, not only have they both grown up, but that Elodie has changed into a wonderful, and beautiful person and that Ross has not changed where it really matters.  The special place that each held for each other is still there, and with their maturity, they realise is a very special thing indeed.

With the class bully out to get them both again, they are given a chance to stand strong or to fall apart and Ross and Elodie both show what they are made of and to what lengths they will go to for the other.

Its a quick read, but it will leave you happy and so glad that Ugly Ross (who really needs a new nickname) gets a happy ever after with the girl that he has always loved.
Posted by Mrs B's Books at 8:47 pm